↓
Home→186th Street Hotel→This “Mayflower” Should Sail Back to Great Neck!

Pictured below is a rendering of the hotel for 186th Street that a Great Neck company proposes to build on 186th Street. This is same company whose plan for an even larger hotel was turned down by the Department of Buildings (DOB) two years ago.

We note the creative license of the giant tree (tall ellipse) that has suddenly sprouted in front of the entrance of Michaels that serves to hide the scale of the hotel. Of course, even with creative license, there is no hiding the width of 186th Street! That red car leaving the hotel is about to hit the white truck! (wide ellipse) Note that this impeding collision is in spite of the fact that no car is parked on the west (closest) side of the street. Of course, with the low-rise houses erased from view, why bother showing cars either?!

There are other subtleties to the picture such as the way the hotel apparently bends light waves and casts unusual shadows to minimize its look. (At Francis Lewis H.S., we learned that massive objects can bend light–not that we are suggesting that the hotel is that massive…but it does makes you wonder.) Wish we could better illustrate these subtleties, but from our last post, you know that the FMTA’s Photoshop skills are limited! 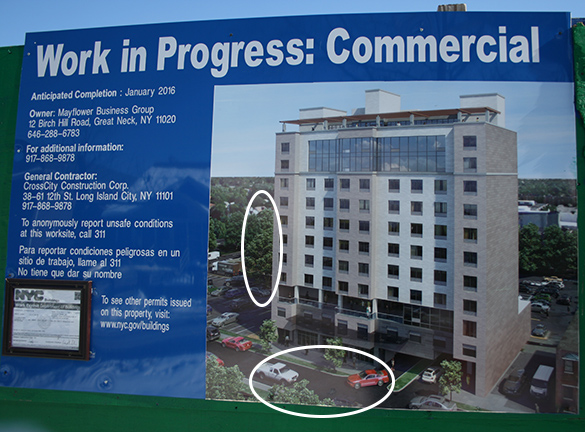 We thank our friends at the Fresh Meadows Homeowners Civic Association for raising this issue and thank their president, James J. Gallagher, Jr., for his efforts at publicizing this issue and the more general issue of too many hotels being planned for this area.

You may want to read related articles in the Queens Chronicle and Times Ledger.