We’ve had a lot of snowy weather this winter and this rare winter aerial photo, from December 1947, reveals that there was a lot of the white stuff on the ground, too, during the winter of 1947-48! (Story continues after photo.) 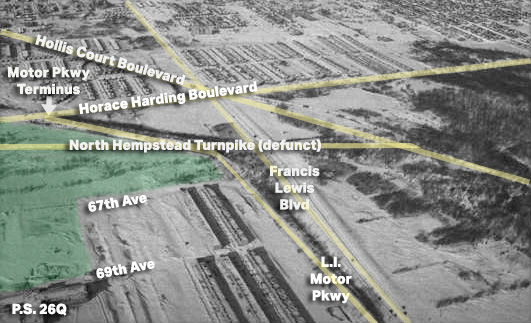 In the photo, P.S. 26Q and the attached row houses along today’s 197th and 198th Street can been seen as taking shape, but development of the eastern portion of Fresh Meadows (shaded color) had yet to begin. Soon construction would erase the parts of three Fresh Meadows Country Club holes that can be seen between North Hempstead Turnpike and 67th Avenue, including the long 587-yard, par-5 16th hole that ran along 67th Avenue.

Development of Fresh Meadows would also eliminate the portion of North Hempstead Turnpike (today’s Booth Memorial Avenue) between Horace Harding Blvd. and Hollis Court Blvd., including the section shown in the photo. it would take several more years for the area near the Motor Parkway terminus to be developed as a park and as the P.S. 179Q school building.

Eventually, Horace Harding Blvd. would yield to the Long Island Expressway and the portion of Hollis Court Blvd. south of Horace Harding would disappear during the construction of the Clearview Expressway. The L.I. Motor Parkway remains the recreation bike and walking path that it had already become in 1947. In the photo, the defunct intersection of Hollis Court Blvd. and North Hempstead Tpke. is the approximate position of the pedestrian bridge over the Clearview that is located north of 73rd Avenue and south of the Long Island Expressway.

Note: The arrow pointing to the terminus also marks the area in which a speed camera, the subject of a recent FMTA tweet, was installed nearly 70 years after the photo was taken!