As noted in Saturday’s blog entry,  The New York Times discussed the EB-5 Visa program in yesterday’s edition,  That “immigrant investor” program awards an entrance visa and gives fast track access to permanent resident status. To qualify, one needs to be willing to invest $500,000 in a  Targeted Employment Area (TEA) in a project that will create 10 new full-time jobs. The U.S. Citizenship and Immigration Services (USCIS) defines a TEA as either being “a rural area or an area experiencing unemployment of at least 150 percent of the national average rate.”

What possibly could this have to do with the hotel project on 186th Street?

The law that created the EB-5 program provides for the organization of something called a regional centers that are governed by rules that seem to ease the way for participating in the EB-5 program. According to information on a Klasko Immigration Law Partners, LLP, webpage, a regional center also affords other benefits such as allowing the immigrant to live anywhere in the U.S., to have unrestricted travel in and out of the country, and to allow the children of that immigrant to live in and study in the U.S.

In 2011, the USCIS accepted an application to establish the NYC Mayflower Regional Center Inc. with the listed address of 12 Birch Hill Road, Great Neck, NY. Could the Mayflower in the Regional Center name have anything to do with the Mayflower Business Group (MBG), the self-identified owner of the 186th Street hotel? Back in February, 2014, this blog discussed that business and displayed a construction site picture that showed the address of MBG as 12 Birch Hill Road in Great Neck. 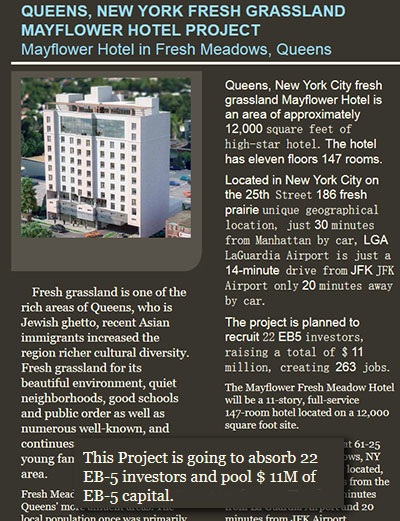 That’s not a coincidence, as the NYC Mayflower Regional Center’s own website reveals—although not very openly unless you can read Chinese characters. For readers who don’t, at right is a partial webpage from their site. Don’t blame the Mayflower folks for any mistranslations or offensive phrasings that the Google translate function may have accidentally produced–but do note the sales presentation and the sentence this blog has highlighted before continuing.

Now, recall those 22 immigrant investors being sought must have their money invested in a rural area or an area with very high unemployment. Well, the hotel is going into a “rich area” (and that is a fair translation from the Chinese), so “Fresh Grassland” would have to be–and not just sound like–a rural area, eh? Not necessarily…Huh?

As the Times article notes, oversight of the EB-5 program has been lax and developers have been “allowed to incorporate contiguous census tracts” in a way to link an area of high unemployment to the well-to-do area in which they seek to do business. So, by defining the “Mayflower Regional Center” loosely geographically, the Mayflower Business Group can build hotels in specific areas that otherwise would not qualify as a TEA zone—for example, Fresh Grassl, er, Meadows or the booming Hunters Point district of Long Island City where Mayflower has already completed the Wyndham Garden Long Island City hotel.

So, having established who is responsible for the 186th Street hotel, the question arises “How were they ever permitted to build that hotel” The answer, which was years in making, is the subject of tomorrow’s entry.

P.S. If you missed yesterday’s Times story, or want to read the many comments it has generated, you can find the story and comments here.