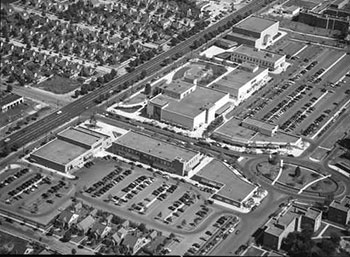 See anything odd near the bottom of this vintage 1951 aerial photograph of the Fresh Meadows main shopping center?

Five little houses seem to intrude on the west parking lot. Not part of the development, they were built shortly before the development was started. How and why is the story for today’s entry, as the three house lots on the left form the footprint of the 186th Street hotel. Consider this  a story about five houses and some angles, in all senses of the word.

First angle: Going east, just after the Fresh Meadow Lane pedestrian overpass, the Long Island Expressway turns to the left and forms a triangle of sorts with the start of 64th Avenue and 188th Street. It’s not a true triangle as 64th Avenue curves as it transitions from one street grid west of Fresh Meadows Lane to another grid, one that 188th Street helps to define.

That odd “triangle” spurred home building in the late 1930s, west of today’s Utopia Parkway and along 64th Avenue, then a short dead-end road. Developers slowly extended 64th Avenue and at 183th Street curved the road to align the avenue to the boulevard that preceding the Expressway. World War II interrupted development, but after the War, one builder, Gross-Morton sought to complete the area by building homes on street grid all the way the property line of the Fresh Meadows Country Club, a property line that was irregular at its northern edge. .

Circa 1946, Gross-Morton was using up undeveloped lots south of 64th Avenue, and was planning 185th Street, the last gridded street it could build before running up to the property line of the Fresh Meadows Country Club. It was also planning to purchase the club’s golf course–known to be for sale–and in anticipation built the five houses on the brand-new, one block 186th Street.

Front page news in The New York Times for Sunday, February 3, 1946, was the story with the headline “BUILDERS ACQUIRE QUEENS GOLF CLUB FOR HOME CENTER,” and the subhead “Gross-Morton Co. to Develop 141-Acre Fresh Meadows Property in Hollis.”

Another angle: Of course, Gross-Morton didn’t get to do that. Unknown to the company, New York Life was “playing the angles” to acquire the same property. In a way that might remind you of a more recent developer, New York Life quietly transacted business and paid the club $75,000 more than it had been offered—the reason for the odd $1,075,000 selling price. This unexpected switch left the five house pictured as orphans as well as some other strange things that exist to this day, such as a 69th Avenue that abruptly ends at the property line fence east of 185th Street, not quite reaching the manhole that was supposed to be under it.

New York Life, of course,  went on to develop Fresh Meadows. (Gross-Morton went on to develop Glen Oaks Village, among many other things.) When citywide systematic zoning was adopted in 1961, New York Life made sure that those five “residential” lots were zoned for commercial use, looking to the day when it could acquire those lots and finish the west parking lot.

Unfortunately for us, that day never come. Zoning meant only to eliminate an oddity that was the product of weirdly-angled street grids and a surprise New York Life move, left the door open for another surprise much later one.

The 186th Street hotel is being built “as of right,” which means so long as the Mayflower Business Group follows all the rules of the NYC Department of Buildings, the developer can proceed. And MBG seems to have an angle on that, too. That angle will be explored in the next entry.

The photo that this entry uses is “Fresh Meadows Housing, NY” from the New York State Archives, “Aerial photographic prints and negatives of New York State sites,” 1941-1957, B1598-99. Box 4, no. 125, and believed to be in the public domain. You may notice that there is a breezeway between the big building (now Kohl’s, then Bloomingdales) and the smaller building (now anchored by Starbucks) on the east side of 188th St. That breezeway was eliminated when Bloomingdales expanded its store circa 1970.