Note: This blog mined the publicly available documents filed with the NYC Department of Buildings on behalf of the 186th Street hotel project to develop the answers in this FAQ.

Q: How many stories tall will this hotel be? 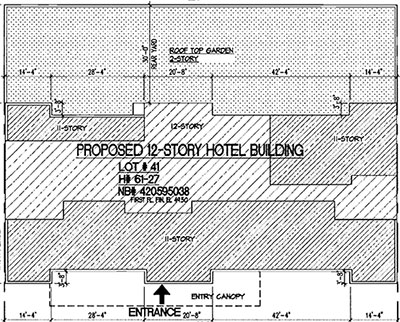 Although described by George Frangoulis (see this entry) as 11-stories, this architect’s diagram, the project’s zoning document labels the hotel as a 12-story building in a number of illustrations including the one at the left. 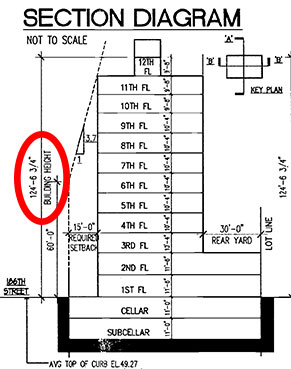 The section diagram shows the hotel from the side looking in a northerly direction. Note the height is nearly 125 feet—much taller than anyone would expect an 11-story hotel to be. Not all floors have the same height and the 3rd floor with its height of over 15 feet houses the lobby as the “community facility.”

From other documents not shown here, one can learn that the “rear yard” will be an outdoor terrace for a “community facility” and that a rooftop garden will exist on the 12th floor, in both the front and back sides of the hotel: above the 11th floor. 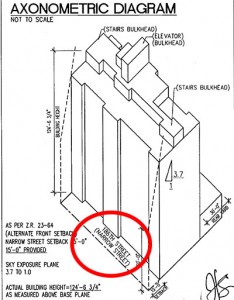 The axonometric diagram (not to scale) highlights the form of the building. Note the label “186TH STREET (NARROW STREET)” which seems to be one of the few points of agreements among the architect, the developers, and the community. (The lower projection in the rear is the two-story base that consumes the entire lot and provides the base for the “rear yard.”)

Q: How many rooms will the hotel contain? 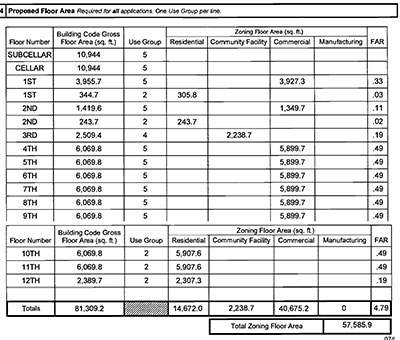 This building contains both hotel rooms and apartment residences. From the details at left (edited for display), each of the six hotel floor will have 17 units each for a total of 102 rooms.

There will also be 10 hotel apartments. Using information in the DOB documents, one can estimate that these apartments would be comparable to one-half of a Fresh Meadows three-wing garden apartment house.

So you could describe this project as a two-level garage on which sits a 6-story hotel, on which sits the equivalent of an A wing and part of a B wing of a F.M. garden apartment. By any measure, very large and very out-of-scale to the neighborhood, but legal to build “as-of-right,” for reasons explained in previous entries.

Q: What type of hotel will this hotel be?

Using information from the plan document shown here, the size of each hotel room can be estimated to 300-350 square feet, a size that would consistent to an upscale business hotel such as a Courtyard by Marriott or Hilton Garden Inn. At one point, a restaurant design firm filed paperwork on behalf of the hotel project. The most recent filing lists a “cafeteria” as an element of the hotel.

The article “New Fresh Meadows hotel expected to house students and immigrants from China,” posted on March 3, 2015, at QueensCourier.com,  identifies the project as a future Hilton-affiliated hotel.  Other sources, as well as a prior public documentation previously identified a Wyndham affiliation. Either would be consistent to the deduced hotel room sizes.

Q: Who will be the clientele of the hotel?

In the same Queens Courier article, Frangoulis is reported to have explained that “part (blog’s emphasis) of the hotel would be used by foreign exchange students from China who will be studying in nearby schools like St. John’s University.” The article quotes James Gallagher, Jr., the president of the adjoining Fresh Meadows Homeowners Civic Association as noting the hotel “doesn’t really make any sense to us because Fresh Meadows isn’t exactly close to many schools.” In part one of this series, the reader can see that MBG’s own website advertised the hotel’s “proximity” to nearby airports, not colleges, as one would expect for a hotel catering to tourists or business people.

Next week this blog will examine what can changes can be made now to prevent, in the future, projects such as the 186th Street hotel.