On January 21st, representatives for Federal Realty Investment Trust met with members of our local Community Board 8 to discuss a preliminary proposal that would expand both the west side (Michaels) and east side (Kohls) of the main shopping center on 188th Street. The FMTA opposes both parts of this proposal and urges Community Board 8 (CB8) to reject both parts.

Because the entire commercial and residential Fresh Meadows development constitutes a Special Planned Community Preservation District, Federal Realty would ultimately need to obtain a special permit from the City Planning Commission to make either change, a process that would normally begin by seeking approval from CB8. 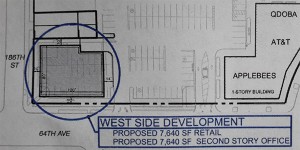 On the west side, Federal Realty proposed a new, free-standing west side building of about 15,000 square feet that would be built in existing parking lot space at corner of 64th Ave. and 186th Street, the street on which the new hotel is being constructed (see illustration at left).

Should the Post Office decide not to renew its lease that expires in two years, Federal Realty also proposes to replace the existing Post Office building with a new two-story building that would have 28,000 square feet of retail and office space. This building would more than double the floor space of the existing post office building (see illustration at right).

Members of the CB8 and members of the public in attendance January 21st raised several concerns. An overarching concern was taking any action that would jeopardize or weaken the protections granted by the Special Planned Community Preservation District status. This special status for our community arose from actions of founding members of FMTA over 40 years ago, so the issue is near and dear to the FMTA. Fresh Meadows was one of two planned communities that was granted this status in 1974 and the status restricts development that underlying zoning might otherwise permit.

Putting concerns about the special status aside for the moment, concerns about parking were also raised by several parties. Both proposed structures would eliminate parking spaces. Federal Realty offered an internal study that claimed 15% of parking spaces went unused during a busy time, a claim met with great skepticism from many attending the presentation. A FMTA representative additionally expressed concerns about how the western building would adversely affect traffic load and patterns on 64th Avenue.

Reducing parking spaces flies in the face of logic, especially as the new additions would create additional parking needs. The FMTA fails to see how either building would create “an enhanced shopping experience,” which, according to one Federal Realty representative, was a goal of the real estate investment trust’s proposal.

More critically, the FMTA believes that both structures would fail to preserve and protect the character and integrity of our community, a key goal of the special zoning that governs Special Planned Community Preservation Districts. Both proposed buildings upset the balance between buildings and open space and upset the harmonious scale of development, things that Section 103-00 clause (b) seeks to explicitly protect.

How the commercial area relate to the residential areas is critical to the integrity of our community. In the main shopping center, the original developers used topography to lessen the visual impact of the shopping center and to separate it from residential areas. Developers even partially excavated a hillside to place the east side parking lot at a lower elevation. On the west side, the developers took advantage of 64th Avenue as a relatively high point by placing commercial development downslope and placing the largest structures the furthest downslope. Because 188th Street was sunken, compared to the elevation of 64th Avenue, the ground floors of the shopping center buildings that align with 188th Street are similarly sunken, minimizing the visual profile of these buildings.

For this reason, the west side proposal is particularly outrageous when these balance and harmony issues are considered. The east side proposal, with its added height and larger footprint, would violate the integrity, too. No longer would the one-story Post Office building serve as a transition from the commercial to the residential. An existing sightline from 64th Avenue and park area east of the 13-story buildings that allows a view north across the LIE and that creates a sense of openness would be eliminated.

The east side building also has the potential to directly screen, or wall off, the views of some 60-20C 194th Street apartments. This building would also create views from a commercial structure that could directly look into apartments. No existing commercial building in our planned community has such attributes, a subtle but important physical characteristic of the relationship between the commercial and residential inside Fresh Meadows.

The FMTA appreciates what the local Federal Realty management has done in the face of a challenging retail climate of the past few years. The FMTA invites Federal Realty to continue its successful track record of internal renovations to existing structures should additional commercial tenant changes occur. As for the separate matter of the Post Office, the FMTA will work with public officials to ensure that our community continues to be served by a postal facility so that the condition “should the Post Office decide not to renew its lease” does not occur.